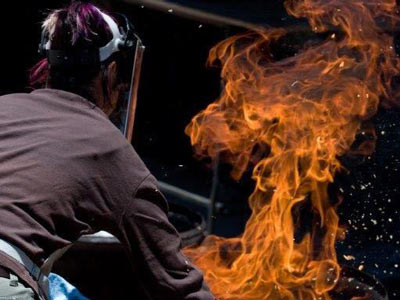 In her ceramic firing experiments, Trayci has become a bit of a pyromaniac with scars to remind her of these exciting experimental times.

“It was a tremendously exciting experimental time that taught me philosophical life lessons as an aside to the technique of things.  I was drawn to the drama and spontaneity of Raku firing. It meant that I could focus my skill on construction and simple glaze technique, leaving the decoration up to the flames.

Curious by nature, I also developed a few post firing techniques of my own using wet newspaper twists, nests of sawdust and paper stacks and rags soaked in old engine oil. The latter was a stinky and fairly risky operation giving amazing gold reductions to my glazes.

“Historically, Raku has its roots in Japanese pottery and the traditional Japanese tea ceremony… Western Raku has adapted this technique making all Raku-fired ware fragile, porous and generally unsuitable for functional use. I see it as decorative with possibilities to experiment with resist techniques, glaze applications and post firing interventions.

So what exactly is Raku?

“At its most rudimentary level, Raku can be described as a low-fire pottery technique in which pieces are placed in a preheated kiln and brought up to temperature quickly. The kiln I use is a simple round ‘top hat’ gas kiln with no temperature control.The firing takes place outdoors, typically lasting around 60 minutes.Which is fast, compared to the average electric glaze firing. I keep an eye on the glaze melt through a round spy hole on the side of the kiln. When the glaze has matured, the pieces are removed with tongs and placed into a drum of combustible material. They are then covered in sawdust and allowed to smoke for some amount of time. The pots are then removed, cooled with water and scrubbed clean.

“My favourite time to Raku fire is early evening, just when the sun setting.  When the kiln reaches temperature and the top is removed, the pots glow red in contrast to the outside fading light. .  The changes in the glazes happen right before your eyes… It’s wonderfully dramatic !

“American potter Paul Soldner once said “In the spirit of Raku, there is the necessity to embrace the element of surprise. Make no demands, expect nothing, follow no absolute fixed plan, be secure in change and learn to accept another solution” …  These have been my life lessons that the spontaneity of Raku has taught me and I carry them with me as my philosophy for an enriched creative life.”

For more information or to arrange a Raku event, email Trayci.